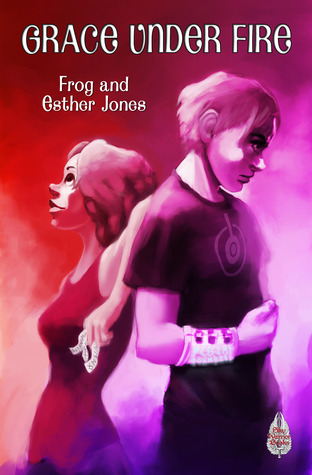 My Review: Grace Under Fire, book 1 in Frog and Esther Jones’ Gift of Grace series, is a criminally-underrated indie gem. If you like smart urban fantasy, you’ll find a lot to enjoy about this series.

In the Gift of Grace world, magic users are known as summoners, due to their ability to summon (that is, move around) matter from place to place. Summoning is an incredibly diverse brand of magic; it can be applied in about a million ways, from combat to healing. Unfortunately, summoning is also totally illegal, which means summoners like Grace have to keep their abilities hidden from the non-magical population. The underground network of summoners, called Groves, are like one giant, secret mafia family. (Yes, it’s as cool as it sounds.)

The relationship between Grace and Robert is my favorite thing about this book. They’re wonderful foils—the brash young guy with more raw power than training, and the exasperated older woman who solves problems with cleverness. In fact, Grace Under Fire delivers one of my favorite tropes, rarely seen in the wild: a tough young guy whose mentor is an older woman. (Bonus points if he has to fetch her coffee at some point in the story.) Watching Grace and Robert play off each other, always in unexpected ways, is a delight.

Now, if you know me very well, you probably know that I’m deeply interested in traumatized, emotionally-damaged teenage boys who do magic. That said, it’s no surprise that I’ve become very attached to Robert. He’s an orphan who has bounced from foster home to foster home—and, unbeknownst to him, he’s got some pretty serious magical chops.

I admit that it was hard for me to connect with Robert at first, on an emotional level—but then I realized that was by design. Robert is a very closed-off person. He’s guarded, understandably so. He doesn’t let anybody in right away, not even the reader. I had to get to know him over the course of the story. By the end, I felt like I’d gone on as much of a journey of discovery as Robert himself.

And then there’s Grace, my love and my darling, the light of my life. Grace is an unapologetic foodie with a wild fashion sense. The first time she used her highly-illegal powers to summon takeout from a faraway restaurant, I knew I loved her. While she doesn’t have the same kind of raw magical power that Robert has, she makes up for it with her technical abilities and tenacity.

I have a weakness for stories set in the Northwest, and as such, I can’t say enough good things about this setting. I love Spokane, and it’s so fun to see familiar places become the backdrop of a magical adventure. (Say, is this what people from New York feel like all the time?) Seriously, I’ve never viewed the Spokane Valley Mall quite the same way after reading about Grace and Robert’s epic battle with a demon from another dimension.

All told, Grace Under Fire delivers everything I want in an urban fantasy, in a well-written package: rollicking adventure, a smart magic system, a realistic setting, and most importantly, fleshed-out characters I can root for.

Pick up a copy of this book. You deserve it.

Add it on Goodreads